About the County Executive 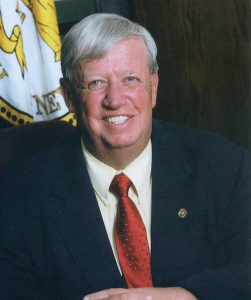 Under the state charter, the County Executive is the chief executive officer of the county government, appointing the department heads and overseeing the activities of all departments and divisions. The County Executive form of government in Hudson began in 1976. Five of the 21 counties in New Jersey have County Executives, with others in Essex, Bergen, Mercer and Atlantic. The term of office is four years, with the current term expiring December 31, 2023.

Hudson County Executive Thomas A. DeGise took office after winning a special election in November 2002 following a scandal that led to the resignation of his predecessor.

On his first day in office, he submitted legislation to the Board of County Commissioners to finally create an Ethics Oversight Board for Hudson County government—which was swiftly approved.

In January 2003, the County Executive made parks, historic preservation and open space the centerpiece of his first State of the County Address, calling for Hudson to finally join New Jersey’s other twenty counties in adopting an Open Space Trust.

The Hudson County Open Space Trust Fund has increased the amount of open space in Hudson County’s 12 municipalities by approximately 25 percent and has dramatically improved the quality of open space and support to historic preservation activities.

The DeGise Administration has provided strong support for the expansion of Hudson County Community College. The school constructed a new, $40 million North Hudson Campus over a light rail stop in Union City, opened a state-of-the-art Culinary Arts and Conference Center Building to house its nationally accredited program, and cut the ribbon on a new library media center, STEM building and other facilities over the last decade.

The County Executive has overseen an aggressive effort to reduce recidivism/mass incarceration through a ground-breaking Community Re-integration Program within the County Corrections & Rehabilitation Center. This program provides in-patient drug treatment with the use of Vivitrol, a one-stop job training center, housing assistance and other life skills and mental health counseling. Participant re-incarceration after one year rates are 70 percent lower than non-participants, leading to the Correction & Rehabilitation Center’s lowest total inmate population in a quarter century.

Within the Northern New Jersey region, County Executive DeGise has served  as the Chairman of the North Jersey Transportation Planning Authority (NJTPA) and continues to serve on it’s executive board tirelessly promoting his belief that infrastructure investment is a key driver for private sector job growth.

He has been honored by a host of community and civic organizations for his dedication to the environment, homelessness reduction efforts and for supporting the independence of individuals with disabilities.

Mr. DeGise was re-elected to his fifth full, four-year term in November 2019, which will expire on December 31, 2023. He is Hudson’s longest serving County Executive.

During the current tern, the County Executive has launched the construction of a new County Courthouse, a new Public Safety Training Center and a replacement for the Casino in the Park within Lincoln Park. During the COVID19 Pandemic, he led an aggressive effort to provide testing and vaccination services to county residents.

Prior to his election as County Executive, Mr. DeGise was Jersey City’s longest serving Municipal Council President, holding that office from 1993 to 2001.He entered public life as a community leader during the 1980′s, founding the New #28 School Neighborhood Association and eventually chairing the Heights Coalition of Neighborhood Associations (HCNA), a group dedicated to improving quality of life in city’s Heights Section.

The County Executive proudly served for more than two decades as a Jersey City public schools’ teacher and administrator. He earned his bachelor’s degree in Political Science from St. Peters College in 1973.

He has two grown daughters, Linda and Amy. Mr. DeGise and his wife, Caren, still live in the Jersey City Heights neighborhood where he grew up.