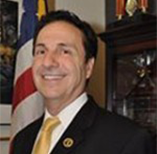 A lifelong resident of the City of Hoboken, Anthony L. Romano has dedicated his life to advancing the interests of the public. Chairperson Romano retired in the rank of Captain with the Hoboken City Police Department, where he helped make our neighborhoods safer for over thirty years.

County Commissioner Romano was an advocate for children long before taking his oath to represent residents at the County level. Examples of his service to local youth include a former teaching career at Hoboken High School and current commitments as the President of the Hoboken Babe Ruth League and the Chairman of the Hoboken Municipal Alliance Against Drugs and Alcohol.

In addition, Anthony was proud to serve on the Hoboken Board of Education from 2006–2009, where he ensured the betterment of the public school system for students.

Furthermore, Chairman Romano encourages academic achievement, having graduated from St. Peter’s University with a B.A. in History and M.S. in Criminal Justice from New Jersey City University. He later went on to complete the Command and Leadership Program at West Point and teaches as an Adjunct Professor at Saint Peter’s University.