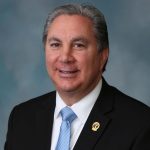 Born in Jersey City and a lifelong resident of North Bergen, Anthony P. Vainieri, Jr. attended Horace Mann Grammar School and North Bergen High School.  He is a college graduate with a degree in Funeral Service and is licensed by the State of New Jersey as a Practitioner of Mortuary Science.  He is currently the Manager and Co-owner of the Vainieri Funeral Home in North Bergen.  He also holds a New Jersey State Real Estate Salesperson License.

On the Board of County Commissioners, Anthony P. Vainieri, Jr. serves as Chairperson of the Finance, Budget & Administration Committee, Chairperson of the Transportation Committee, Member of the Public Resources Committee, Member of the Hudson County Schools of Technology Board of School Estimate, Alternate to the Hudson County Improvement Authority, and as Liaison to the Technology/MIS Committee.  He also serves on the following Committees: Contracts Review, County Banking, Ethics and Public Safety.