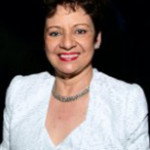 Mrs. Rodriguez is a dedicated public servant who previously served in the New Jersey Assembly representing the 33rd District from 2008 to 2011. She was the first female and Hispanic Assembly representative for the 33rd District and the first Cuban-American Assemblywoman in the State of New Jersey. In the Assembly, she served as Vice-Chair on the Human Services Committee and as Member of the Public Works and Transportation Committee.

Caridad Rodriguez has served as Executive Assistant for the Honorable Albio Sires since 1996, including 12 years of service in the Office of the West New York Mayor. She is noted for being a hands-on problem solver for the citizens of West New York. Her responsibilities included keeping track of the Mayor’s schedule and community relations, allowing her to participate in many programs affecting the citizens of West New York. After Mr. Sires was elected to the United States Congress in 2006, Mrs. Rodriguez continued to be involved in the community as Scheduler and Office Manager for Congressman Sires.

Caridad Rodriguez was also involved in the West New York community as Coordinator for the Municipal Alliance Committee against Drugs and Alcohol where she served for 8 years. She was a member of the West New York Planning Board for six years and served on the Board of Adjustment for three years.

Caridad Rodriguez’s previous professional experience includes serving as Executive Assistant for a local attorney and working as a Paralegal for the firm of Nelson & Walrod, focusing on divorce cases and real estate matters. During her years in the New Jersey Assembly, Mrs. Rodriguez was also employed at Palisades Medical Center in North Bergen, New Jersey, as a Patients Advocate in the External Affairs Department.

Mrs. Rodriguez’s passion for service, commitment and hard work has earned her the following honors and awards: American Red Cross Clara Barton Award for Meritorious Volunteer Service; a special recognition from the seniors of West New York; the Elena Mederos Award for outstanding commitment to the community; the PAM’s List Award by Women in Power; and a special 2012 Congressional recognition for her commitment to the women of New Jersey.

Caridad Rodriguez was born in Cuba and immigrated to the United States with her parents and sister in 1962 – she has been a Hudson County resident ever since. She graduated from Union Hill High School in Union City in 1966 and went on to Berkeley College in New York City, becoming a Legal Secretary/Paralegal. She married her husband Joseph in 1968 and is devoted to her three children – Bonnie, a Special Education Teacher, Glenn an Electrical Engineer, and Amy, a Fashion Designer and Elementary School Teacher. She is also the proud grandmother of Lucas, Eli, Phoenix Liam and Ava Luna.