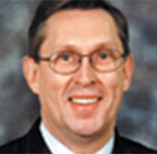 Known for a questioning mind and an ability to get things done, William O’Dea was elected County Commissioner by one vote in a hotly contested election amongst county committee people to fill the unexpired term of County Commissioner Henry “Hank” Gallo, who died unexpectedly in September 1997. In November 1998, County Commissioner O’Dea roundly defended his seat, obtaining the electorate’s full support, for the remaining one year of the term.

Now serving his eighth full term, County Commissioner O’Dea is a member of the following committees: Taskforce on the Homeless; Public Resources; and Liaison to the Workforce Investment Board.

This native of Jersey City has previous experience as an elected official, having served two consecutive terms, elected in 1985 and 1989, as a Jersey City Councilman. Currently, Bill O’Dea is Deputy Executive Director of the Elizabeth Development Company, considered the best-administered Enterprise Zone development company in the country.

Bill O’Dea knows that politics is, at times, theater. He has actually taken his talents in that direction, and is the author of two plays and six screenplays. He is also the author of the novel, “The Legacy of Haguesville.” County Commissioner O’Dea, however, takes his politics very seriously, and served as Executive Director of the Jersey City Democratic Party.